How to Install Chrome OS on PC

Do you want to convert any old PC into a Chromebook? Google does not offer official Chrome OS builds for anything other than official Chromebooks, but there are ways to install the open-source Chromium OS software or a comparable operating system. So, in this guide, you are going to learn how to install Chrome OS on any PC.

Meanwhile, Chrome OS isn’t as feature-rich as Windows 10, so it can’t be denied that it breathes new life into old machines. In fact, I would go so far as to argue that if you are a general user, Chrome OS should be preferred over Windows 10 due to its superior performance and battery life. Furthermore, with Play Store support, you can run Android and Linux apps on your PC. Isn’t that cool?

Furthermore, you can access Linux GUI apps on your PC, which is an added benefit. With that out of the way, let’s get started learning how to install Chrome OS on PC with Google Play Store support.

Before we start our tutorial, let’s get the requirements and downloads out of the way. The configuration will go smoothly if you fulfill all of the criteria and download the necessary files.

1: All we need to do is download Linux Mint and use it as a live USB to install Chrome OS using this operating system, which we will run entirely from the USB. Download the correct version, either 32-bit or 64-bit.

2:  Download Rufus that allows us to flash that image to a USB Drive.

3: Download the latest version of Brunch from GitHub. Brunch. It’s a framework created by a developer called Sebanc, so many thanks to him for making this project possible. The framework generates a generic Chrome OS image from the official recovery image that can be installed on any Windows PC. 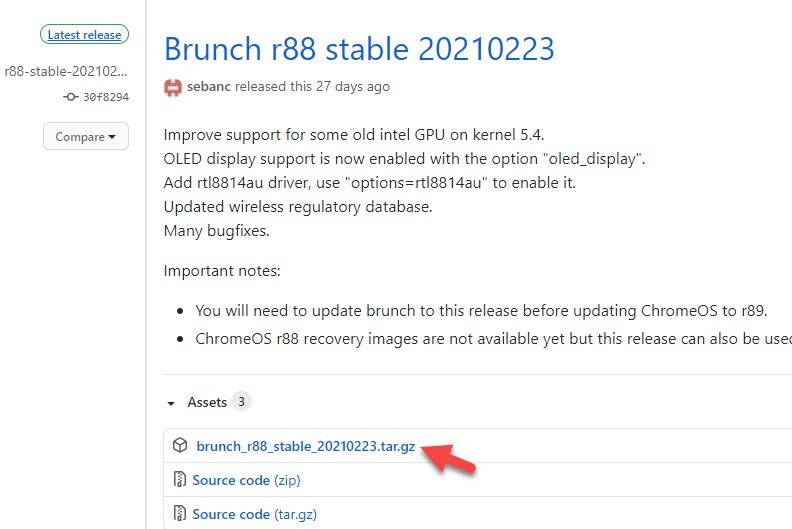 4: After that, download the official Chrome OS recovery image. Open the website and search for “rammus”. Now, click on the latest recovery image to download it (right now it’s 87, but it may change in the future). Here, I am recommending “rammus” because it works on modern Intel processors.

5. Finally, download the “install.sh” script which magically installs Chrome OS without manually typing the commands. The script has been written by Kedar Nimbalkar. To download it, click here and press Ctrl + S to save the file. 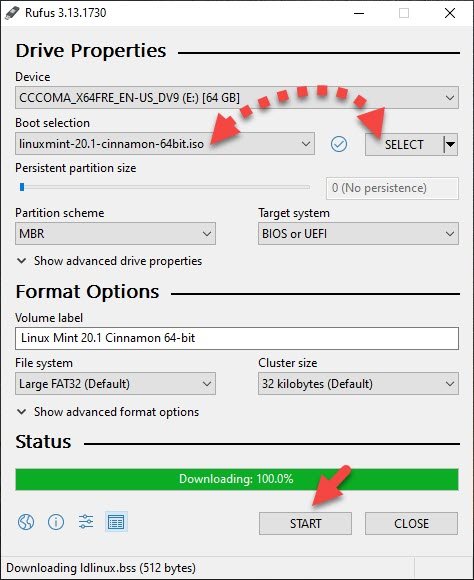 2: After Rufus is done with flashing, close it. Now, create a folder on your desktop named “Chrome OS”. Move the “install.sh” file to the “Chrome OS” folder.

Move the install.sh file to the Chrome OS Folder

3: Right-click on the Brunch file and choose “Extract to Brunch…”. All the files will be extracted in a folder on the desktop.

4: Now, move all the extracted Brunch files to the same “Chrome OS” folder on the desktop. 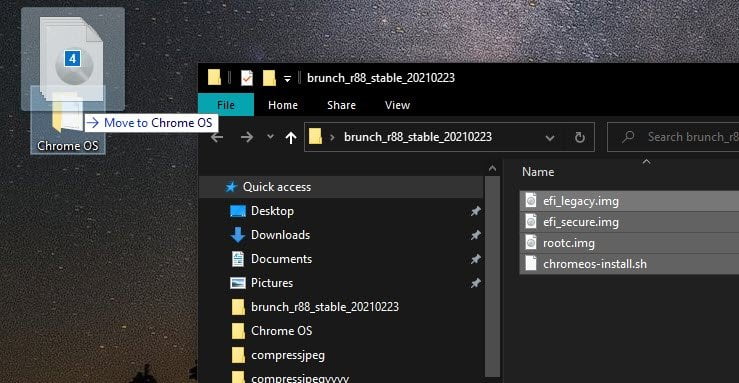 Move the Extracted Brunch Files to the Chrome OS Folder

6: You will get a folder on the desktop. Open it and rename the file to rammus_recovery.bin.

7: At last, move the “rammus_recovery.bin” file to the “Chrome OS” folder.

8: You should have these 6 files inside the Chrome OS folder that you have created before.

9: Move the Chrome OS folder into the USB Drive, which you just flashed Linux Mint Cinnamon.

1: You will boot straight into Linux Mint Cinnamon or select “Start Linux Mint“.

2: After booting into Linux Mint, click the network icon in the bottom-right corner to connect to WiFi or Ethernet. An active internet connection is required for the Chrome OS installer to download some missing libraries and dependencies.

3: Open the Home folder from the desktop. 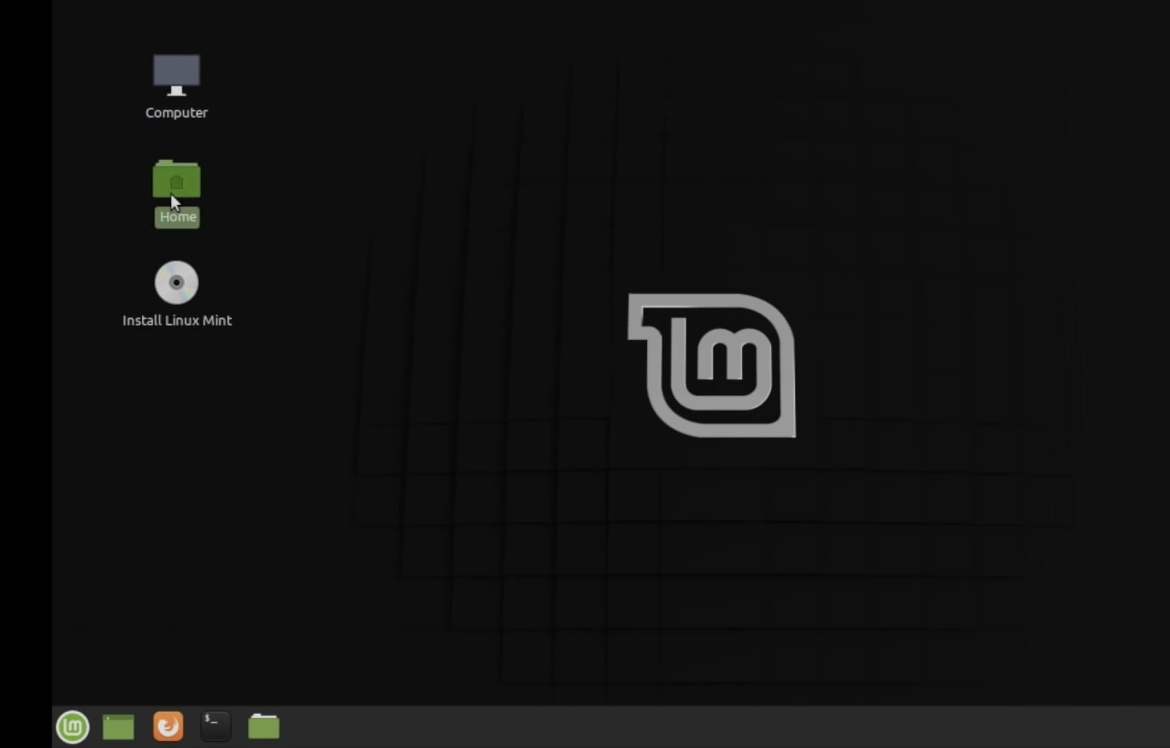 4: Select the “File System” tab. Click on the search button and type “Chrome OS” to find the folder that we moved earlier.

5: Now, open Chrome OS and right-click inside the folder to open the Terminal.

6: Here, type sudo sh install.sh and hit enter. It will start downloading some libraries and dependencies.

8: Once the process is done, you can either type sudo reboot or go to the menu and select Restart and remove the USB Drive.

9: Then your pc will be booted with Chrome OS and follow the instructions on the screen to set up the device.

That’s it. This is how you can install Chrome OS on any PC And if you’ve decided to stick with Chrome OS, make sure to take advantage of Linux apps. It’s very good and works flawlessly. You can also use Wine to run Windows apps on Chrome OS if you miss them. For a video tutorial kindly visit the video by Kedar Nimbalkar or ETA PRIME.

How to Activate Office 365 Pro Plus for Free

How to Hide Notifications from Lock Screen on...

How to Enable Gaming Mode on Galaxy Buds...

How to Uninstall Xbox Game Bar in Windows...

How to Check Command Prompt History on Windows...

How to Install Windows 11 Store in Windows...

How to Stop Windows 11 From Automatically connecting...

How to Remove Activate Windows Watermark in Windows...

How to Add Gmail App for Windows 11