How to Enable & Use Video Call Effects on Samsung Galaxy Devices

Some Samsung Galaxy phones running One UI 3.1 on Android 11 were recently upgraded with new effects while video calling on apps like Google Duo, Zoom, Microsoft Team, and so on. As a result, this feature will change the UI. When we make video calls, the default background changes to a video with many options. Although there aren’t many effects available, this tool allows you to instantly hide the backdrop after a video conversation on Samsung. So, in this post, you’ll learn how to use and enable video call effects on your Samsung Galaxy devices.

Moreover, under the hood of the S21 series smartphones, Samsung provides top-tier hardware. However, as part of its proprietary skin, One UI, it also has several unique software capabilities. These flagship smartphones are now operating on One UI 3.1, which has a slew of amazing features like Director’s View, eye comfort blanket, floating notifications, lock screen widgets, and more.

Furthermore, one of the popular features stated above is the built-in “Video Call Effects.”It is possible to change the background color by replacing it with a picture. Meanwhile, users may apply opacity to the background of video calls in the same manner that Google Duo does.

How Does it Work?

This amazing One UI feature blurs your background while keeping you in focus during a video conference. On the other side, there are options to make the backdrop a solid color and replace it with a custom picture.

It’s worth noting that this function is only accessible in Samsung handsets running One UI 3.1, whereas Zoom, a popular video calling software, is still unfamiliar with the blur effect.

It’s also worth noting that the video call effects functionality debuted on the Galaxy S21 and is now only accessible on Samsung phones running One UI 3.1.

Step 3. Now, look for the option called Video Called Effects. Tap on it to enable. 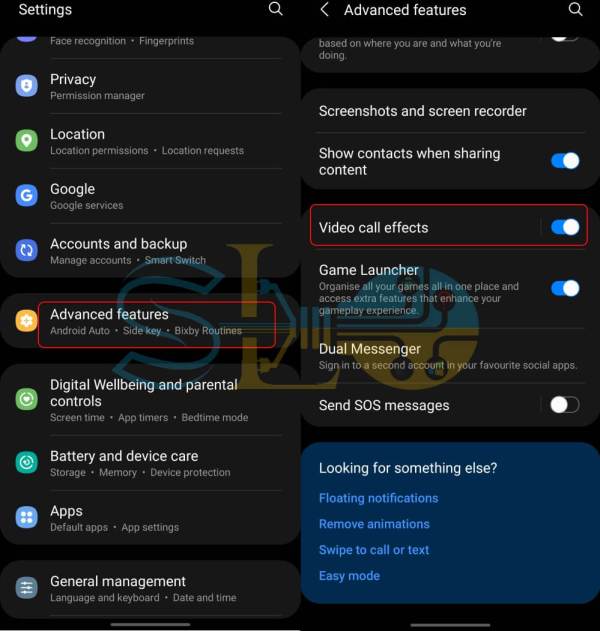 Step 4. Select the background effect you want to use. You can either select solid color or a background image.

With those steps completed, you may now employ video call effects in your next video conversation. As of now, the capability is only available for Google Duo, Zoom, Microsoft Teams, and Cisco Webex.

This article explains how to use video call effects on the Samsung Galaxy to blur the background, use a solid color as the background, or replace it with a custom image during a video call in apps like Zoom and Google Duo. In the next months, the functionality will be gradually rolled out to other Samsung phones.

How to Change Incoming Call Screen Background on One UI 3.0 (Android 11)