Home Android How to Access Samsung RAM Plus?
AndroidHow To

Do you want to know and check if your Samsung Galaxy device has RAM Plus? In this article, we’ll show you how to access Samsung RAM Plus.

Meanwhile, RAM is one of the most critical components of a smartphone, and manufacturers are now increasing its capacity through software upgrades. Following in the footsteps of other Chinese OEMs, Samsung has introduced RAM Plus, a virtual memory expansion function.

However, the Korean tech behemoth has quietly released the virtual RAM extension capability, which adds up to 4GB of storage capacity to the smartphone. It should be mentioned that the Galaxy A52s gained the Samsung RAM Plus feature, as well as a new firmware update that allows for RAM extension.

What is RAM Plus?

Last year, as part of software upgrades, Samsung added the RAM Plus function to select devices. These devices have a function that allows users to increase their accessible memory by 4GB. Samsung’s RAM Plus function, like comparable services from other smartphone makers that allow users to “extend” their available RAM, uses unused, free storage on a smartphone as virtual memory for smartphone users who need to run programs that demand more resources.

It is worth mentioning, however, that, unlike Microsoft Windows, Android is built to optimize memory utilization by prioritizing resources for various programs. When a running program requires additional memory, Android will usually expel other background applications and services from memory to keep the phone working smoothly. Similarly, while Samsung did not allow customers to manage the RAM Plus function prior to One UI 4.1, the screenshot posted by SamMobile implies that users may still be unable to disable the feature, even on the most recent One UI 4.1 version.

Here are the steps to check RAM Plus on Samsung Galaxy devices if your device is compatible:

Step 2. Scroll down and then tap Battery and device care.

Step 4. Now, check if the RAM Plus feature is available on your Galaxy phone. 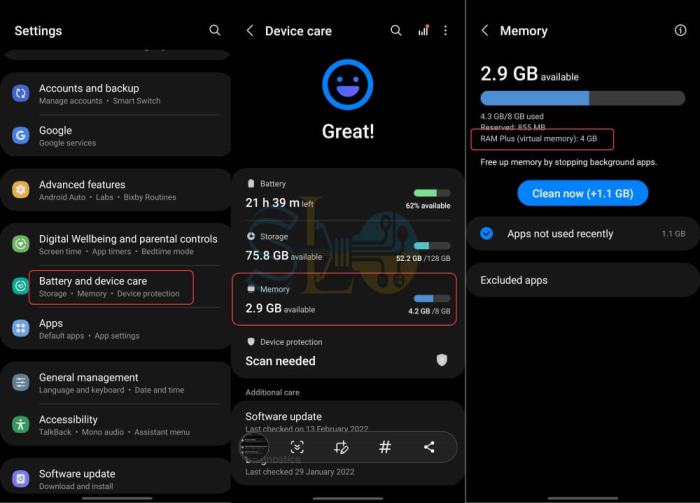 Step 5. Tap the “i” button to know what exactly is RAM Plus (Your internal storage can be used as virtual memory to improve app performance). 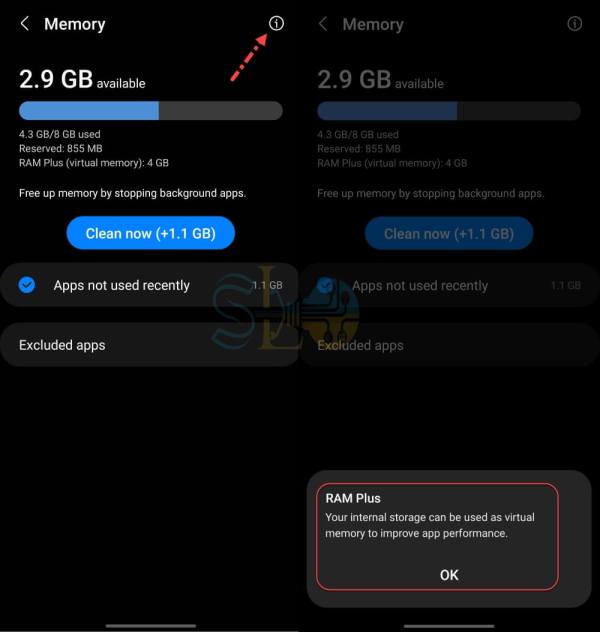 How to Extend RAM Plus on Samsung Galaxy Phones

Meanwhile, if you think that the default 4 GB is not enough for you then you can change it to 6 GB or 8 GB. If you have updated your eligible Galaxy phones to Samsung One UI 4.1 then you can change the RAM Plus. Remember that with One UI 4.0, RAM Plus can not be extended.

One UI 4.1 RAM Plus with advanced features – Device List

As per Sammy Fans:

These were the steps to check and access Samsung RAM Plus. Remember that with the Android 12-based One UI 4.0 upgrade, the manufacturer may add the RAM Plus capability to more of its devices.

How to Record Games with Samsung Game Launcher