As you all know that there is two variant of the Samsung Galaxy chip or processor, Snapdragon and Exynos. however, if you’re eager to know and check whether your Galaxy phone or tablet is Snapdragon or Exynos then this post is for you.

Meanwhile, the Exynos CPU is mostly available to consumers in Europe and Asia. While consumers in China and North America are likely to receive the Snapdragon.

The structure of Exynos and Snapdragon SoCs is what distinguishes them. If well-executed, each of them is supposed to be a champion in their own right—however, as we all know, this is not the case. All of Samsung’s Exynos processors are designed and manufactured in-house, whereas Qualcomm outsources chip production to TSMC (Taiwan Semiconductor Manufacturing Company).

It is a collaboration that has consistently been delivered for the corporation. Chip development is a collaborative process, and both Qualcomm and Samsung utilize ARM’s architecture, along with in-house tweaks, for their processors. ARM provides Cortex cores to both businesses, from which Samsung creates the Mongoose version and Qualcomm changes and renames them Kryo cores.

Significant changes in implementation begin here. The Exynos chip is an octa-core CPU by design, whereas Snapdragon processors are quad-core chips. Nonetheless, Qualcomm says that the Kryo cores outperform the Cortex and Mongoose Cores by up to 23%. Qualcomm utilizes a bespoke GPU dubbed Adreno, which is immediately superior to ARM’s Mali GPUs, which Samsung has been utilizing on their SoCs. However, with the current Exynos 2100 CPUs, Samsung teased going with AMD for future Mobile GPUs but chose the latest ARM Mali-G78 GPU. However, all is not lost for the Samsung chip. It boasts quicker RAM and Memory Speeds due to the use of smaller semiconductors.

There’s no direct way where you can check whether your Galaxy phone has Snapdragon or Exynos chip. But the CPU-Z tool might be handy in this situation. This is a free app that you can get from the App Store. It’s also quite useful. The CPU-Z is a tool for determining your device’s system information. That means you may check the battery state, capacity, device brand, system, and other information.

Step 2. Once installed, launch it.

Step 3. Now, navigate to the DEVICE tab and check whether it’s Snapdragon or Exynos next to the Board option. In my case, it’s Lahaina. the chipset is known as “Lahaina,” which is the codename for Qualcomm’s Snapdragon 888 CPU, according to a new entry in the Geekbench database. It looks to be running on a 1.8GHz base-clocked octa-core CPU. 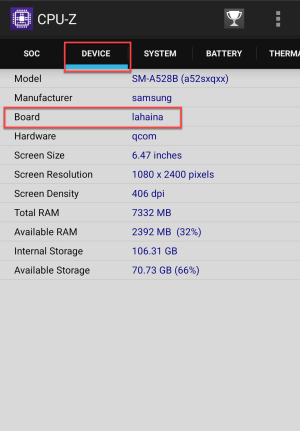 Check Snapdragon or Exynos on Galaxy

If CPU-Z is not showing the exact details then you can use the Device Info HW app.

Alternatively, go to Settings  > About phone > Model number. If the model number ends with F/DS is the Exynos model while U and W are Snapdragon. 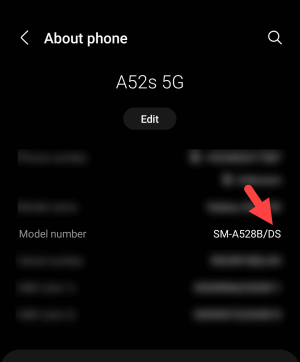 Why Does Samsung use Exynos Chips?

The Exynos chip was chosen by Samsung for a variety of reasons, the majority of which are commercial in nature. As the largest manufacturer of mobile devices by volume, Samsung’s desire to lessen reliance on other chip producers is understandable. It is a paradigm that Apple has successfully implemented, and the benefits are obvious. Because most mobile networks in the United States employ CDMA, most Exynos phones end up in Europe and Asia rather than the United States. It was previously unsupported on prior Exynos CPUs. Another consideration is that Snapdragon has integrated LTE and supports 4K video, both of which Exynos CPUs have struggled with in the past.

That’s it. These were the methods to check and know whether your Galaxy phone has Snapdragon or Exynos chip or processor.

How to Check Battery Health on Samsung Galaxy Devices

How to Show Internet Speed on Status Bar on Samsung Phone

How to Screen Mirror Nothing Phone (1) to any Smart TV