How to Remove Contacts from iPhone Share Sheet on iOS 16

Meanwhile, if you’ve noticed on your iPhone or Android phone, whenever you want to share a picture, for instance, you’ll see some suggested contacts from Messenger or WhatsApp. Sometimes it’s useful but sometimes it can be a headache.

The easiest method to share photos, files, and access Shortcuts activities on your iPhone or iPad is through the share sheet. You may also have easy access to suggested contacts from compatible chat programs there.

If you don’t see these contact recommendations on your iPhone, you may activate them in the Settings if they aren’t enabled by default on new devices. These recommendations are far from ideal, so you could choose to eliminate the row entirely or only show certain contacts.

How to Remove Suggested Contacts on your iPhone when Sharing Photos

A share sheet with several options, including actions, applications, and contacts, is displayed when something is attempted to be shared on an Apple iPhone running the iOS operating system.

The contacts Apple suggests when you hit the share button takes up a lot of screen space if you’re one of the people who doesn’t share a lot of stuff directly with other connections. Thankfully, the business offers customers the option to turn off the feature that displays contact suggestions in the share sheet when shopping.

So, here are the process the remove a specific person from the share sheet on iPhone or completely disable stop showing contacts in the Share Sheet on Apple iPhone:

Method 1. Remove each Suggestion Individually from the Share Sheet

Open the share sheet, long-press the contact you wish to hide, and Siri will no longer display that contact in the row of options. That contact will quickly vanish if you choose “Suggest Less” in the pop-up.

Even while you won’t see the contact as frequently and they will remain hidden for long periods of time if you keep using the “Suggest Less” function, you can see them again when sharing. It differs from permanently removing a contact from Siri recommendations, which can only be done by deleting the contact. 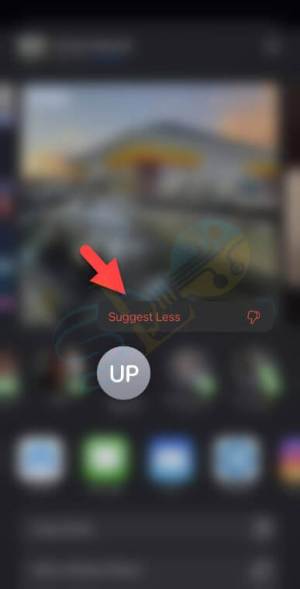 Method 2. How to Stop Showing Contacts in Share Sheet on Apple iPhone

2. Scroll down and select Siri & Search.

3. Turn off the switch next to “Show When Sharing” in the “Suggestions From Apple” section.

That’s all. These were the methods to remove suggested contacts when sharing photos on an iPhone running iOS 16. After you have completed the steps in this step-by-step tutorial, the contacts list on the Sharing Sheet on your Apple iPhone will be deactivated and won’t appear when you attempt to share something from the device. This means that when you want to share something, you won’t receive the recently used or often used contacts recommendation and will instead need to choose the application from the list and begin the sharing procedure with the recipient.

How to Show Notification Count on iPhone Lock Screen [iOS 16]

How to Get Rid of Duplicate Contacts on iPhone [iOS 16]

How to Change the Color Palette on Samsung Galaxy?

How to Make Siri Announce Notifications on iPhone 13 [iOS 16]