Like Samsung Galaxy phones and tablets, the Protect Battery feature is also available for Galaxy Book laptops. When enabled, your Galaxy Book2 Pro stops charging at 85%.

Meanwhile, Samsung has introduced two new productivity laptops as a follow-up to the well-received Galaxy Book Pro: the hybrid laptop-tablet Galaxy Book2 Pro 360 and the Samsung Galaxy Book2 Pro. Here’s a startling discovery from our evaluation of the latter: it’s exactly like the previous one, only better.

Similar to its predecessor, the Galaxy Book2 Pro offers itself as a high-end option for a sophisticated work environment thanks to its full-sized keyboard, enormous trackpad, and ultra-thin frame. However, enhanced speakers, a quick new CPU, and increased thermal performance make this a package that is even more appealing than before. For more...

The function of the Protect Battery feature is to safeguard the battery. Since battery life decreases with each complete charging cycle—recharging the battery to 100% of its whole capacity—the battery will last longer if it is only charged to 85% of its full capacity.

Samsung is at last offering customers a way to extend the life of their batteries by limiting the amount of charge the battery may receive during each charging session. Although Samsung tablets have long had Protect Battery, this is the first time we’ve seen it on a Galaxy smartphone.

It is intended to make your battery last longer because charging it to 100 percent daily can hasten the lithium-ion cell’s deterioration. The battery will fully charge if you do this several times over the course of a year, but it will deplete more quickly, leaving you constantly looking for a charger.

How to Limit Samsung Galaxy Book2 Pro Battery to 85 Percent

Here’s how you can enable the Protect battery feature on your Galaxy Book2 series:

1. Press the Windows key and search for Samsung Settings. Once found, click on it to open. 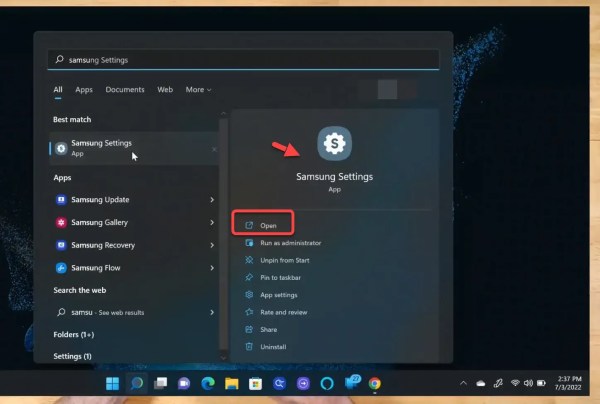 2. Select Battery and performance from the left-hand side pane.

3. Finally, turn the Protect battery feature on. By doing this, your Galaxy Book2 Pro will stop charging at 85 percent. 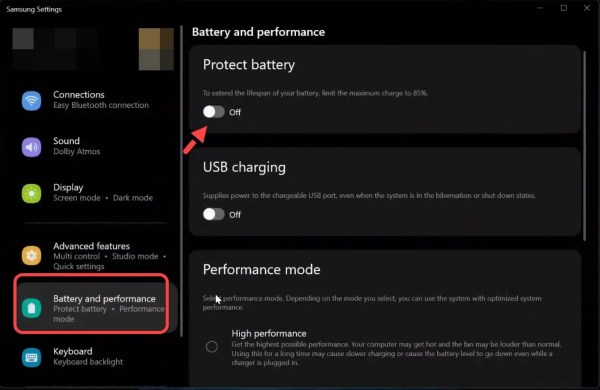 That’s it. This was a quick tutorial on how to limit the Galaxy Book2 Pro battery to 85 percent.