How to Enable Double Tap Screen On/Off on Samsung Phones

Are you looking forward to using the double-tap screen on or off on your Galaxy phones? For that, you must enable this feature first. So, in this guide, you’ll learn how to enable double tap screen on/off on Samsung phones.

Meanwhile, the name of the Double Tap to Sleep function explains what it does. Users may now put their phones to sleep by double-tapping an empty section of the home or lock screen. It’s essentially the same as Double tap to wake, however, it works backward. It’s not a massive addition to One UI 3.0, but it’s effective, and it has the potential to be perceived as a significant quality of life boost by many Galaxy smartphone customers, particularly those who are already used to Double-tap to wake.

Double Tap Screen On/Off is abbreviated as DTSO. The Android smartphone’s double-tap capability is quite handy for those who don’t want to repeatedly utilize the power button to switch on or off their device. Due to prolonged use, the majority of Android or tablet users damage the power button on their phones.

When your power button breaks, you’ll have to take your Android to a service facility and pay a hefty fee. As a result, the majority of people want to know how to secure their power button. All Android users would find this post-DTSO- utilize double tap on Android function to toggle screen on-off really useful.

So, here are the steps to enable double tap screen on/off on Samsung Galaxy: 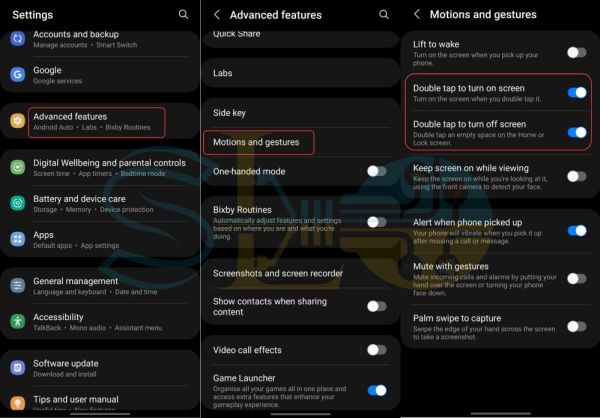 Once this feature is enabled, whenever you double-tap on an empty screen the phone screen will immediately go on or off. Meanwhile, This feature had previously been provided to Android phones through third-party apps, but this is the first time it is being formally delivered to Samsung’s smartphones through a One UI upgrade.

That’s it, These were the steps to enable double tap screen on/off on Samsung Galaxy phones.

How to Copy Image From Gallery to Clipboard on Samsung

How to Enable Protect Battery on Samsung Galaxy One UI 4.0 (Android 12)