How to Enable Extra Dim on Android 12 Samsung Phones

Do you want to make your screen dim more on Samsung Galaxy phones? If yes then you’re at the right place. In this Android post, we’ll show you how to enable extra dim on Android 12 (One UI 4.0) Samsung phones.

Meanwhile, if you’ve updated your Samsung Galaxy phone to Samsung One UI 4.1 based on Android 12 then you can easily use the “Extra dim” feature. With the One UI 4.0 software, Samsung included a slew of new features as well as significant system improvements. The 4.0 version of One UI, which is based on Google’s Android 12 operating system, features an incredible and handy feature called ‘Extra dim,’ which decreases the screen’s brightness even more.

You probably don’t give screen brightness much thought until it becomes a nuisance. Even with the lowest brightness, staring at your phone might be too bright at times. Android offers a feature called “Extra Dim” that can help in similar scenarios.

Extra dim, a new accessibility option in Google’s Android 12, displays its capabilities of decreasing the screen’s brightness in addition to the amount allowed by the hardware. As a consequence, if your phone’s lowest brightness isn’t low enough, you may enable the Extra dim option.

Meanwhile, Extra dim is an accessibility feature that comes standard with all Android 12 devices; however, you may quickly enable or disable it to suit your needs. When it comes to Samsung smartphones, the notification center has an Extra dim toggle so you can quickly use the option.

In addition to setting Extra dim, you may also tweak it according to your preferences. It also offers an Intensity level option, which allows users to lessen or increase the brightness of their smartphone’s screen. Finally, you may press the toggle to have the phone automatically stop the Extra dim option when you restart the phone. If you want to keep the Extra dim setting active, all you have to do is make sure the Turn off after restart button is disabled.

After updating to the Android 12-based One UI 4.0, you may enable the screen Extra dim option directly from the phone’s notification panel. You may also access the function by going to your phone’s Settings menu.

So, here are the steps to enable and use the Extra dim feature on Android 12 from the Settings app:

Step 2. Scroll down and then select Accessibility. 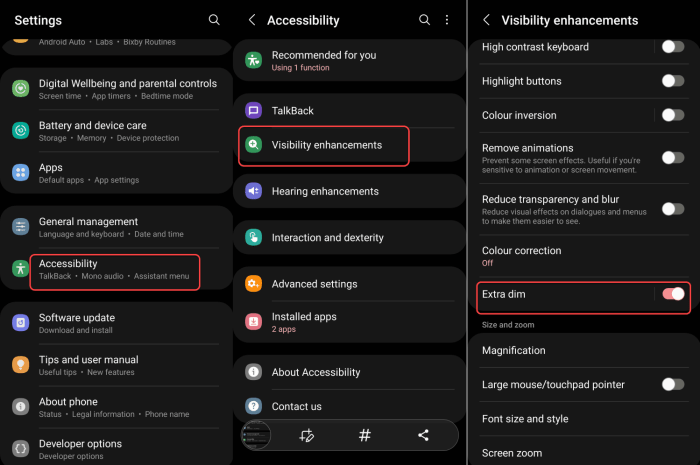 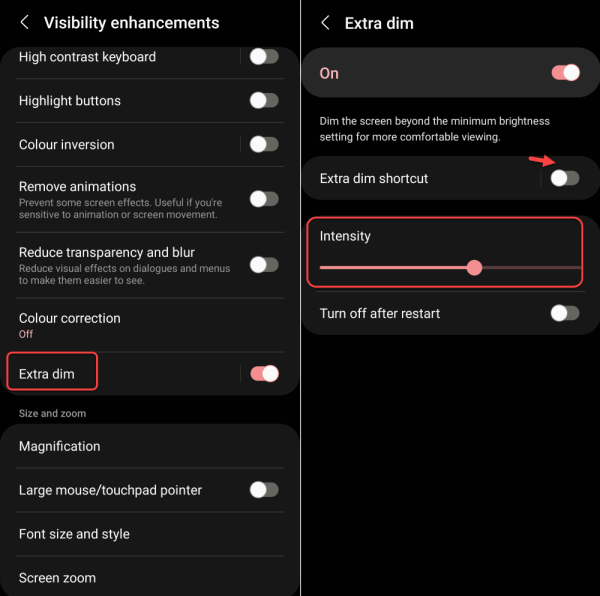 That’s it. These were the steps to use and turn on the extra dim feature on Samsung devices running on One UI 4.0. Swipe open the Quick Settings and turn on “Extra Dim” whenever you feel the screen isn’t going dark enough. This is one of those minor tweaks that might make your Android experience a little more pleasant.

How to Hide WhatsApp Message Content in Notification Bar on Samsung