To be honest, screen pinning is an unknown feature but at the same time is a useful security tool that restricts access to your device to only one application. Screen pinning is also known as Pin Windows in Samsung Galaxy devices with Android Oreo, Android Pie, Android 10, and Android 11. However, it can be useful when someone asks you to borrow your phone. You can pin an app, for example, and give a friend your phone. Your friend can use the app only with the screen pinning. You will unpin the screen to use your other applications again. So, in this guide, you’ll learn how to use screen pinning on a Samsung Galaxy phone.

What is Pin Windows?

Pin windows also known as Screen pinning in other Android devices is a useful feature in Samsung Galaxy smartphones with Android Oreo and later. It was first introduced in Android 5.0 Lollipop as “Screen Pinning.” You can pin an application to your device’s screen. This feature locks your phone so that only the pinned application is available to the person using it. In addition, pinning an application avoids interruptions to other programs and functions and avoids you from unintentionally exiting the program.

Note: The steps are taken on One UI 3.1 based on Android 11 and the steps are identical for Android 9 and Android 10.

To use this useful feature, you need to enable it first. This hidden feature can be found in your phone’s Settings app. Here’s how to turn the Pin windows on:

Step 5. It’s optional, you can also turn Ask for PIN before unpinning on as well. 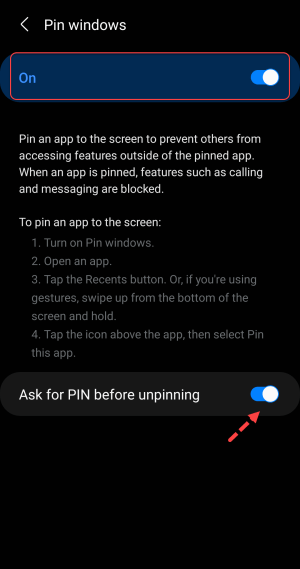 The problem is that unpinning the screen is as simple as holding two buttons, which Android informs you how to do when you enable screen pinning. Therefore, to protect your data, make sure that Ask for PIN before unpinning is turned on or enabled. screen pinning on Samsung S10

How to Pin an App to the screen on Samsung 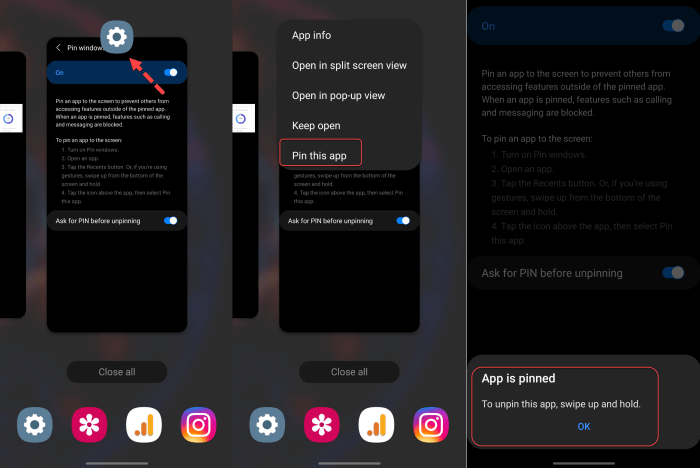 use screen pinning on Samsung

When pinned, you can safely hand over your phone to your mates, friends, or family without having to worry about searching around where they shouldn’t be.

How to Unpin an App on Samsung Galaxy on S8, S10, or Later

To unpin the app when Navigation buttons are enabled:

To unpin the app when the Full-screen gestures are enabled:

Screen pinning ( Pin windows) is helpful in situations where someone asks to borrow your phone to make a call without any hesitation. However, if someone unpins an app then he or she will need to provide a PIN or password so overall, a good security feature to have.

How to set up Guided Access in iOS 15 for iPhone, iPad, and iPod Touch

Where is the Assistant Menu on Samsung Galaxy Phones?