Home Android Where is Compass in Samsung Galaxy S21, S20, S9 & Others
AndroidHow To

In the meantime, A magnetic compass is built into your Samsung Galaxy smartphone. If you’ve ever used Google Maps or a similar tool and noticed the directional arrow in the map display indicating the way you were facing, you’ve undoubtedly seen your compass in operation. The built-in compass app, on the other hand, does not appear by default on your phone.

What is a Compass?

A compass is a tool for navigation and geographic orientation that displays the cardinal directions. It usually consists of a magnetized needle or other elements that can pivot to align itself with magnetic north, such as a compass card or compass rose. Other devices, such as gyroscopes, magnetometers, and GPS receivers, could be employed.

Angles are commonly shown in degrees on compasses: north equals 0°, and angles grow clockwise, thus east equals 90°, south equals 180°, and west equals 270°. The compass uses these numbers to display azimuths or bearings, which are generally expressed in degrees. If the local variance between magnetic north and true north is known, the magnetic north direction also gives the true north direction. Click here to know more.

How to Enable Compass in Samsung Galaxy

In order to use the compass on your Galaxy devices, you must enable it first: 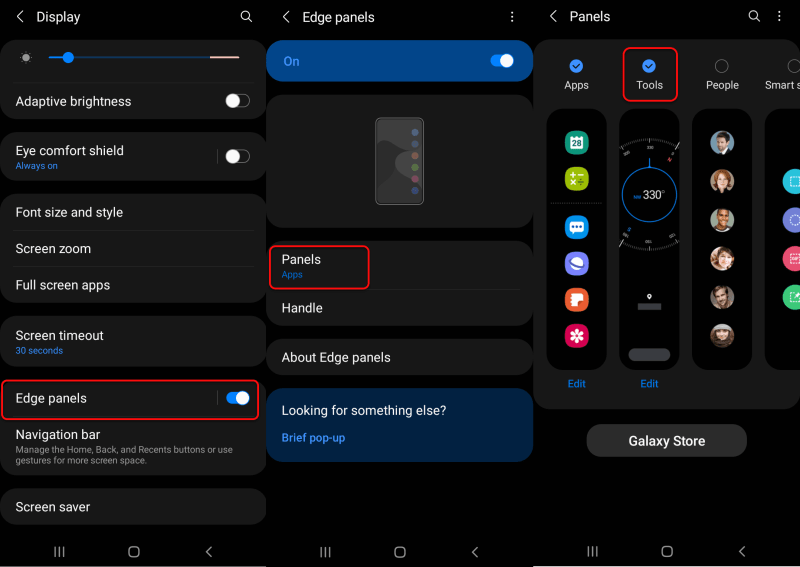 How to Use Compass on a Samsung Galaxy Devices

Once the Tools option is enabled within the Edge panels, you can easily launch and use the compass.

Step 1. Swipe left to open Edge panels then navigate to the Tools menu.

Step 2. Here, tap Compass. To detect your location quickly and accurately, turn on Location in Settings.

Step 3. Finally, to use the compass on your Samsung Galaxy phone, tap Calibrate.

Step 4. Now, the compass is ready. 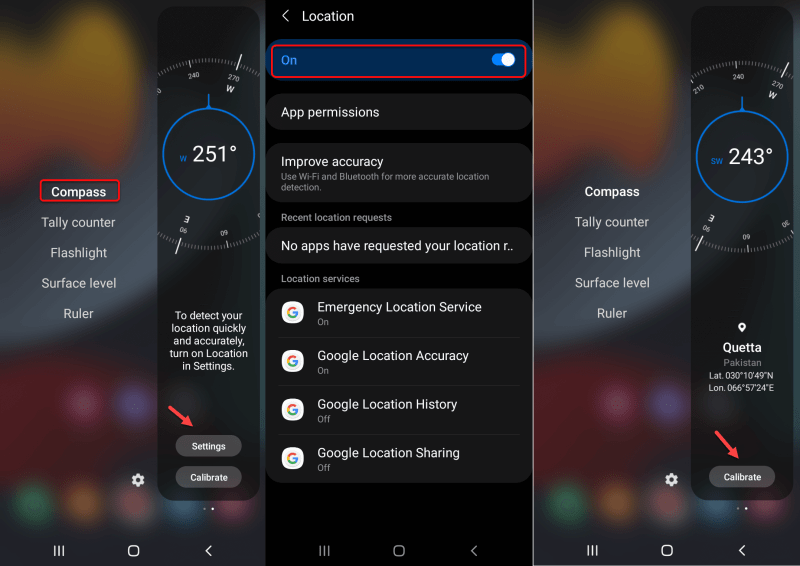 Use Compass on a Samsung Galaxy Devices

The software displays degrees in decimal notation, making it simple to use even if you don’t know anything about navigation. It also gives bearings in the magnetic or true north, making it a useful compass app for use with a topographic map or general navigation.

The Digital Field Compass app is basic software with no frills such as attractive backdrops or maps, making it battery-friendly. The software is free, accurate, and simple to use, with a digital center panel that displays your heading in degrees, but it requires WiFi to work properly.

The Gyro Compass app works just like a real-life compass. You can find your compass bearing, magnetic north, and true north, and the software will account for any changes.

The program is completely free, simple to use, and a useful navigation tool. You may also use it as a physical compass because it features a slope indication, huge numerals, and a large rotating bezel. To find out more about the best compass apps for Android read this.

That’s it. This post was all about where is the compass in Samsung Galaxy devices and you’ve learned how to enable and use it on your Galaxy phone without installing any third-party apps.