How to Enable 360 Audio on Galaxy Buds Live

Do you want to get the 360 audio feature on your Samsung Buds (Buds Live)? If yes then you are at the right spot. In this wearable guide, you’ll learn how to enable 360 audio on Galaxy Buds Live, Buds Pro, and Buds 2.

Meanwhile, Samsung debuted the Galaxy Buds Pro in 2021, and they were the company’s sole wearable featuring Dolby 360 Audio until today. Galaxy Buds 2 and Galaxy Buds Live have received a software upgrade that brings them closer to the Pro experience.

Samsung’s 360 Sounds technology uses headphones to create 360-degree audio. It’s comparable to Apple’s spatial audio in that it digitally filters movie and TV program soundtracks to make it appear as though individual sound sources are coming from constant locations inside a scene, whether off to one side, behind you, above you, or below you.

The result is a portable surround sound effect that, like Dolby Atmos, may impart a feeling of height to playback rather than relying solely on the flat X-axis. If you’re watching a suitable piece of material, this should deliver a more immersive viewing experience than utilizing stereo audio alone.

The inclusion of head-tracking technology enhances the impact even further. The Galaxy Buds Pro can detect your head movements and adjust playback so that sounds originating from the on-screen action always sound as if they’re coming from the same direction, even if you’re looking elsewhere, thanks to the use of your phone or tablet as an anchor point.

So, here are the steps to get 360 audio on Samsung Buds (Galaxy Buds Live, Buds Pro, and Buds 2):

Note: First of all make sure to update your Galaxy Buds. To update it, go to the Galaxy Wearable app  > Earbuds settings > Earbuds software update. Once updated, follow the below steps.

Step 1. Pair and connect your Galaxy Buds with your Samsung phone via Galaxy Wearable app. 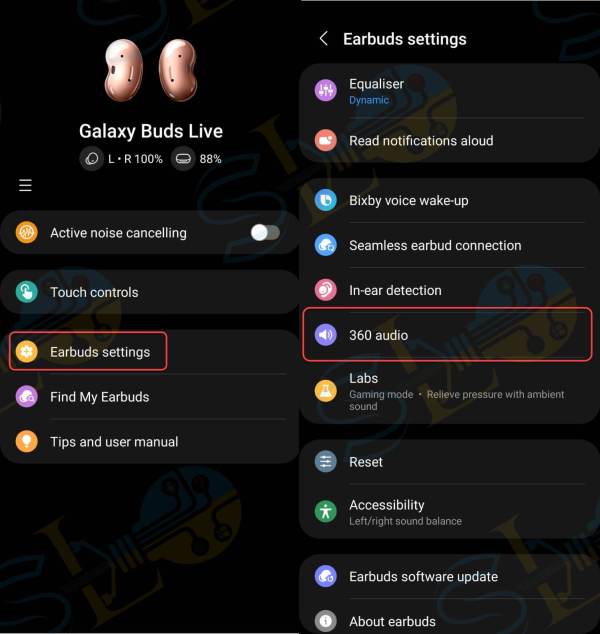 Older Samsung Models Are Not Supported

Unfortunately, 360 Audio is not supported by earlier earbuds like the Galaxy Buds and Galaxy Buds+. In reality, Samsung no longer offers any of these earphones, so if 360 Audio is essential to you, the Galaxy Buds Pro, Buds 2, or Buds Live earbuds are the best options. Because of Dolby Head Tracking, which uses accelerometers inside the earbuds, the sound will travel in the direction the user moves their head when 360 Audio is turned on.

It’s not enough to have 360 Audio-capable earphones; they’ll also need to be linked to a Samsung Galaxy smartphone or tablet running One UI 3.1 or later. This implies that even if a user possesses a set of Galaxy Buds with 360 Audio compatibilities, they will be unable to enjoy the benefits if they are using a non-Samsung mobile or an earlier Samsung device. There’s also the matter of app support to consider. 360 Audio works with a variety of popular apps, including Netflix, Hulu, and Disney+, as long as the video being watched is Dolby Atmos compatible.

That’s it. These were the steps to get and enable the 360 audio feature on your Galaxy Buds Live, Buds Pro, and Buds 2. Unfortunately, older Samsung Buds do not support this feature.

How to Check Battery Percentage of Galaxy Buds & Charging Case