How to Hide Status & Navigation Bar on Samsung While Taking Screenshots

Do you want to take screenshots on your Samsung Galaxy phone without a status bar and navigation bar? If yes then in this guide, you’ll learn how to hide the status & navigation bars on Samsung while taking screenshots.

However, there are multiple ways to capture a screenshot on your Samsung Galaxy phone. You may use gestures, ask the Google Voice Assistant, or touch physical keys (often the power and volume-down buttons pressed simultaneously).

It’s astonishing how often you need to use your phone to snap a screenshot. Knowing how to take screenshots is essential, whether it’s to capture a social media post, the winning screen in a game, or just a humorous meme.

Fortunately, Samsung’s Galaxy phones and tablets have a number of options for taking screenshots, including using the touchscreen, side buttons, and even the S Pen.

How to Hide Status & Navigation Bars on Samsung While Taking Screenshots

Step 4. Finally, enable the option next to the Hide status and navigation bars. 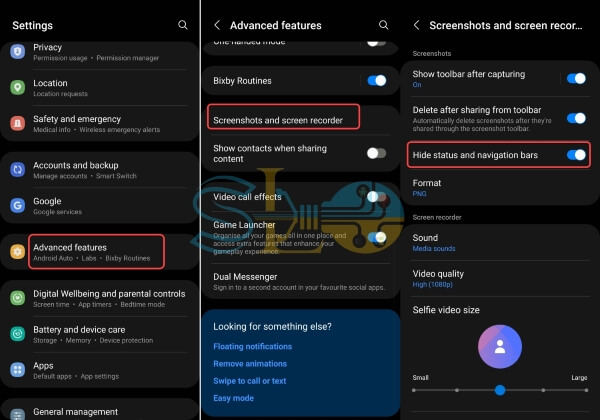 Now, whenever, you take a screenshot both the status and navigation bars won’t appear after this.

What is a Screenshot?

A screenshot, also known as a screencap or screengrab, is a digital snapshot that depicts the contents of a computer screen. Screenshots allow you to capture exactly what’s on your screen so you may share it with others or refer to it later.

Taking, storing, and sharing screenshots is a great way to save time. Some even argue that screenshot is the most significant aspect of the internet. But how can a snapshot of your computer screen be so important? Screenshots, you see, are frequently used as a new era artifact. They’re a means of proving to others that you’re seeing what you think you’re seeing.

They not only assist you in proving your case, but they also assist you in archiving the past. They can, for example, help you remember how a website appeared before the most recent brand redesign, that strange error message you received a few months ago, or even a delicious gossip piece you don’t want to forget.

How to Change Wallpaper on Windows 11 without Activating?

How to Hide Likes Count on Instagram for Android and iPhone