Home Android How to Screen Record Games on Samsung without Games Launcher: Android 10
AndroidHow To

How to Screen Record Games on Samsung without Games Launcher: Android 10

Luckily, if you have Samsung Galaxy S9 or later Galaxy devices then you can easily screen record games and apps by using Samsung’s built-in Screen recorder feature instead of Game Launcher. In the recent updates, Game Launcher won’t provide you the screen recording option.

Why to Screen Record Games?

There are plenty of reasons to screen record your gameplay. Most of the people like to play high-octane action games like Fortnite and PUBG and some other popular Android games and you might want to record and share your epic journey with your friends and family. Apart from this, there are hundreds of YouTubers, who would like to screen record popular games and upload it to their YouTube channel.

How to Screen Record Games on Samsung Without Game Launcher

Before you start screen recording apps and games on your Samsung Galaxy Smartphones, you need to make some changes to Samsung’s native screen recorder in the Settings app.

Step 5. Here you can select your preferred settings like Video quality, selfie video size, and sound.

How to Screen Record Games on Samsung Galaxy

Step 1. Swipe down twice from the top of your screen to open the Quick Panel and then tap Screen recorder.

Step 3. After a three seconds countdown, the screen recording will start.

Step 4. Open any game then your gameplay will be start recording.

Step 5. To show yourself in the screen recording process tap on the person icon.

Step 6. To stop the recording simply tap the stop button.

Step 7. The recordings will be saved to your Gallery app. 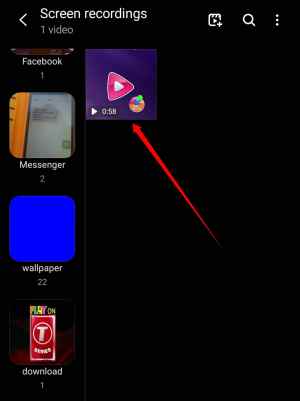 That’s it. This is how you can screen record games and apps on Samsung Galaxy devices that are running on Android 10 specifically Galaxy S9 or later Samsung devices. Unfortunately, you can’t use Game Launcher to record games on Android 10 instead you can use the built-in screen recorder feature to record your gameplay or apps on your Samsung phone.

How to Clear Facebook Search History on Search Bar on PC, Android & iOS

How to Mute Direct Messages on Instagram App: 2 Methods