How to Play Instant Games on Samsung Galaxy Devices

As you all know that mobile gaming popularity has gone to the next level, that’s why every smartphone company is trying to inject a built-in Game Booster or Game Plugin. Meanwhile, Samsung Galaxy devices have a built-in dedicated game booster known as “Game Launcher.” However, there are some Galaxy users who might not want to download and play heavy games but instead wants to play instant games on their Samsung Galaxy devices. So, in this guide, you will learn how to play instant games on Samsung Galaxy smartphones.

As I said earlier, Samsung introduced a Game launcher for their smartphones and it was first launched on the Galaxy S7 series. Samsung was one of the first major smartphone manufacturers to implement gaming-related features on its devices.

What are the Benefits of Game Launcher on Samsung Galaxy

Consider Game Launcher as a separate launcher containing all of the installed games on your computer. That’s just their common use though. Offering exciting features screenshots, temperature tracking, and more brings your gaming experience to another level. They can all be accessed during gameplay.

However, in the older versions of Game Launcher, you could screen record your games but with the introduction of Samsung One UI 2.0 or Android 10, the screen recording option has moved to the Phone’s Settings.

Additionally, the game screen can be locked to pause your game. Additionally, up to 4 apps can be used when playing a game. These app icons will appear on the pop-up menu, and the app will also open in a pop-up. So, you needn’t abandon your game to use other games. For example, while you’re playing games like PUBG, you can continue chatting with your friend on WhatsApp.

How to Enable Game Launcher on Samsung Galaxy

Make sure Game Launcher is enabled before playing instant games. Samsung Game Launcher is accessible from your Samsung phone’s app drawer. If you Can’t find the game launcher then try searching for “Game Launcher” with the Finder Search bar at the top of the app menu.

If you still couldn’t find the Game Launcher app, it means that you didn’t enable the game launcher.

After enabling Game Launcher, make sure you have updated to the latest version (4.3.02.6) you can update from Galaxy Store.

Step 2. Tap Instant Plays at the bottom of the screen. 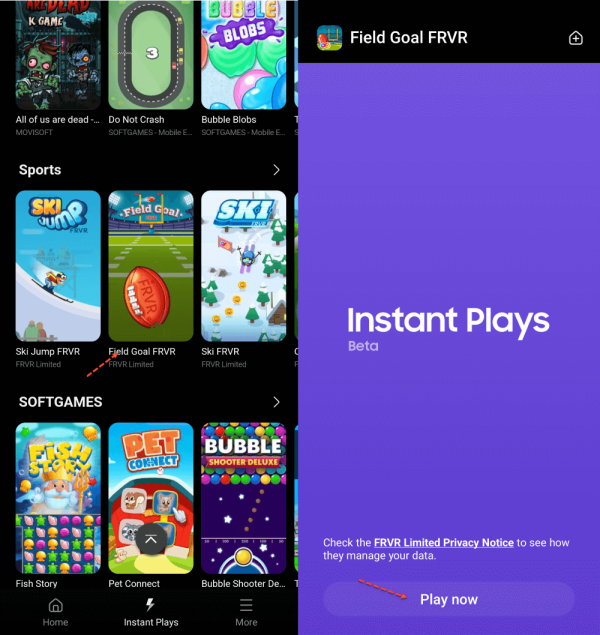 Step 4. Enjoy instant games on your Samsung phone without installing it.

That’s it. This is how you can play instant games on Samsung Galaxy smartphones. Although the games aren’t high-quality or high-octane games still the games can be addictive and won’t occupy your phone’s storage.

How to Record Games and other Apps with Samsung Game Launcher

How to Hide Likes Count on Instagram for Android and iPhone