How to Read Snapchat Messages Without Opening on Android

Meanwhile, Snapchat notifies the sender when you open and read a message they sent as other messaging applications do. But did you know that you may read communications covertly without the other person noticing? Although it may have begun as a straightforward software for sharing images and videos with friends, Snapchat has grown to become one of the most popular social media platforms. That’s in part because Snapchat now offers such a vast array of functions. It’s simple to be hooked into everything with Snap’s Stories section, TikTok-like Spotlight videos, Snap Map, and more.

How To Know If A Message Is Read/Seen On Snapchat?

When the delivered message under the recipient’s name switches to open, you know your Snapchat message has been seen. Holding down on the text you just sent will also show you the status of your message. If they have opened it, their name will appear along with the words “Username” and “Opened.”

How to Read Snapchat Messages Without Opening them on Android?

There are multiple ways to do so like using Airplane mode. But we recommend using the Half Open Snapchat Messages tricks.

When asked if you can check Snapchat messages secretly and how to open a Snapchat without the other person knowing, what do you say? The majority of people mention using Airplane mode on their devices. This approach may be a little overly complex, but it is effective. However, some users have reported serious issues with this process.

What is the Snapchat half-swipe method then? According to their knowledge, they will be able to verify that a Snapchat message was opened as soon as their mobile device is linked to the internet. As an alternative, you may preview Snapchat messages by using the half-swipe feature.

2, Go to the Chat section and find the Snapchat message that you want to be read without opening it.

3. Tap and hold down on their profile icon or Bitmoji and swipe to the right. Remember that don’t release your finger but hold it there and read the chat. 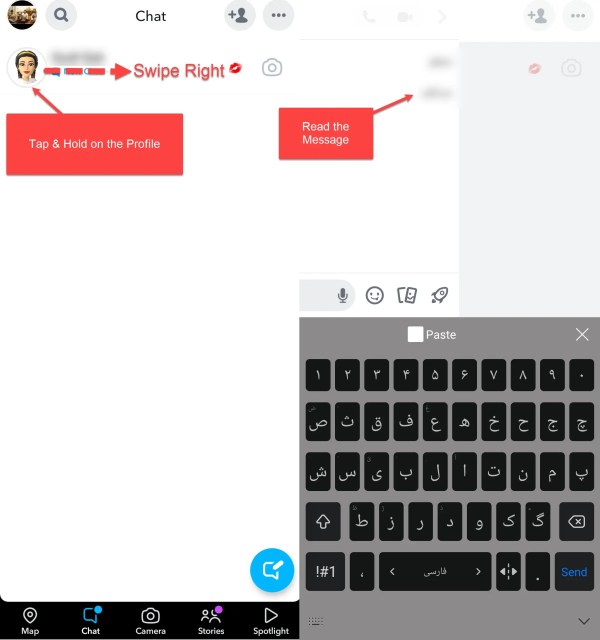 4. When you have read it, you drag your finger back to the left and back to the chats page. Now you can release your finger. It will still say “New Chat” and they can’t see that you read it.

That’s it. This was the best method to read Snapchat messages without opening it on Android devices,