Do you want to improve the quality of the photos on your Samsung Galaxy phone? Photo remastering is a lesser-known function of Samsung One UI. It is a function that allows the terminal to analyze images in order to enhance them, as the name implies. Because the procedure relies on artificial intelligence, we’ll need a Samsung with sufficient processing power to make it work. Learn here how to remaster a picture on a Samsung Galaxy phone.

Furthermore, Samsung appears to be concentrating a lot on the user experience on its One UI 3.0 or One UI 3.1 or later to deliver plenty of hidden or advanced capabilities to users of the Samsung Gallery app for Galaxy smartphones, tablets, and foldable. You should be aware that Samsung’s Gallery app has a ‘Remaster Pictures’ function.

Even if you’re using a Samsung Galaxy smartphone with One UI 3/3.1 or above and the Samsung Gallery app, there’s a good chance you’re not aware of some of the program’s additional/hidden features that you should start utilizing right away.

What is the Remaster Pictures?

The Remaster Pictures option is buried in the Samsung Gallery app and is only available on Galaxy devices running One UI 3/3.1 or higher. It’s something to keep in mind. However, some users claim that this functionality is being pushed to the One UI 3.1 version.

Although the functionality was previously accessible on a large number of devices running the One UI 3.0 version, it wasn’t available on all eligible devices depending on the CSCs. Fortunately, the capability is now accessible internationally on the One UI 3.1, which includes AI-based picture recognition.

So, what exactly does this functionality do? This function scans and detects all accessible photographs on your Samsung Galaxy device in the background using the stock Gallery app. Then it tells you which image(s) need to have their resolution increased to its maximum potential, which ones need to have their brightness, color, or sharpness improved, and so on.

As a result, all of your photographs in the Gallery app or on your Galaxy smartphone will be sharp and clear, with better pixel resolution. That is the major function of the Remaster Pictures tool, which performs admirably and significantly enhances image quality, as can be seen at first sight.

How to Remaster a Picture on a Samsung Galaxy Phone

This is something you’ll want to keep in mind every time you open the Samsung Gallery app to access the gallery or view media files. Keep in mind that you won’t be able to utilize this function manually until the system or the Remaster Pictures tool detects an image or many photos that require actual retouching.

The nice thing is that you won’t have to look for it on the gallery app since it will inform you instantly.

So, here are the steps to improve the quality of a photo by using the “Remaster pictures” feature:

Step 3. Here, you’ll see the Remaster pictures option. Enhance the look of dull, blurry, and low-quality pictures. Tap on it to open and find the picture that you want to remaster or improve the quality. 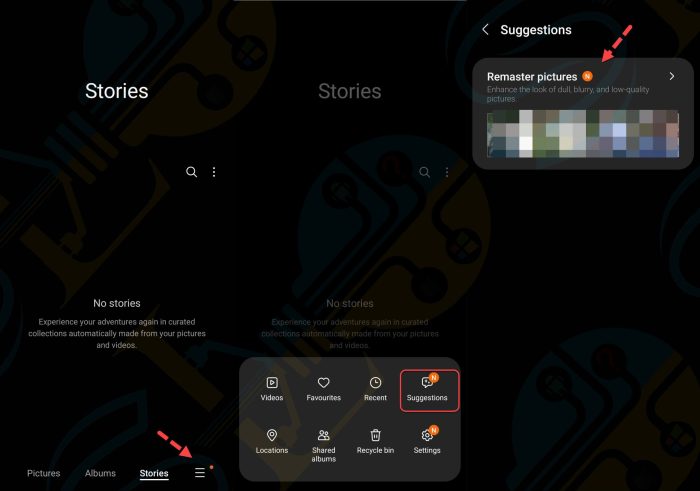 Step 4. To observe the visual change straight away, move the bar or divider line to the left or right. As a preview, you may see the ‘Before‘ and ‘After‘ impact of the image here, so you can notice the difference.

Step 5. Once you are happy with the result, simply tap Save. 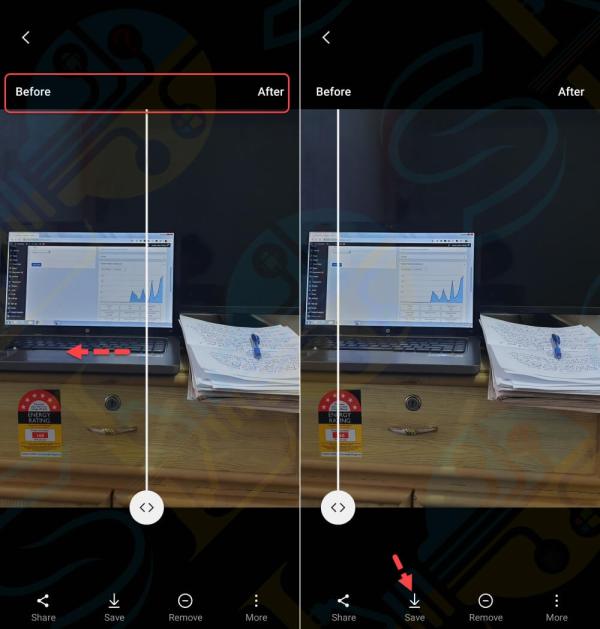 Remaster a Picture on a Samsung

If the Remaster Pictures function recognizes an image that needs to be enhanced in quality, you’ll see a retouching symbol at the bottom right side of the image anytime you tap on it to see it separately in the gallery app, as shown in the screenshot below.

That’s it. These were the steps to remaster a picture on a Samsung Galaxy phone. The quality of the outcome will be determined by the type of photograph you provide, and the processed image may not always be better. I propose that you conduct some research to determine which type of enhancement best matches your preferences.

How to Control a PC with an Android Smartphone

How to Blur Background of Photo on Samsung Phone