With One UI 4.1, Samsung added a new function to the Gallery app that enables you to instantly turn a static image into a 24-hour time-lapse.

Unquestionably one of the most feature-rich Android skins available is Samsung’s One UI. It comes with a tonne of goodies that are absent from Android skins made by other OEMs, and Samsung keeps adding new features with each significant upgrade. Some of the enhancements, however, go unnoticed because of the enormous amount of features Samsung adds to One UI with each new version. One UI 4.1’s Gallery app’s 24-hour time-lapse function is a prime example.

With the release of the Galaxy S22 series, Samsung released the One UI 4.1 upgrade. It included a number of new features, including the previously mentioned 24-hour time-lapse function, an upgraded S Pen and Samsung Note experience, the Director’s perspective in the Camera app, and more. The latter is one of One UI 4.1’s nicest innovations, but because it doesn’t have a specific setting in the Gallery settings and only appears on some photographs, it frequently goes undetected.

A time-lapse movie compresses a lengthy amount of time (like 24 hours) into a few brief seconds. Such “effects” are common in documentaries.

The most popular method for producing time-lapse videos is to slow down the recording’s frame rate. For instance, you may choose between 24, 30, or 60 frames per second while recording a video using the Galaxy S22 camera app (frame per second). Therefore, 24 (or 30, 60) “snapshots” will be taken by the camera every second.

What is Scene Relighting?

Samsung’s approach to using AI to “make” (rather than “record”) time-lapse films is called Scene Relighting. With the Galaxy S21, Samsung unveiled the Scene Relighting function. However, it was not emphasized in the marketing materials, making it a lesser-known characteristic. Samsung appears to have marginally enhanced this function on the Galaxy S22. Scene Relighting was backported to the Galaxy S20 and Galaxy S10 with the Android 12 upgrade.

In order to assess if it can produce a time-lapse film for the image, Scene Relighting first employs AI technology to analyze the picture and identify the items, such as the sky, clouds, water, trees, and buildings, on it.

If Scene Relighting can extract enough information from the image, it will utilize AI to create a variety of photographs for the scene with varied lighting situations, such as morning, evening, sunset, night, and dawn. The 12-second time-lapse film that results from the combination of these photographs shows how the light changes in the landscape over the course of a 24-hour period.

2. Choose a picture. The function often operates on pictures that the app identifies as landscapes and other pictures of a similar kind.

3. A tiny clock symbol will show in the bottom right corner of the image if it can be relit. To start the time-lapse, click the icon.

4. The time-lapse video will begin playing on its own. You may now select whether to send the video or save it. 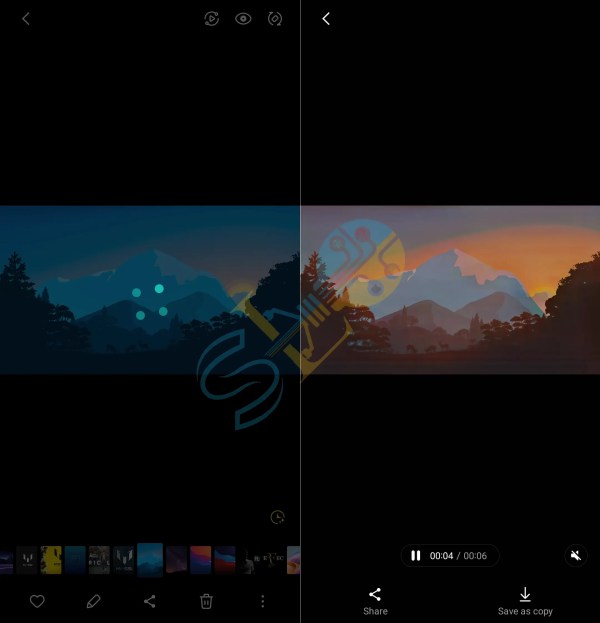 Convert a Photo to a Time-lapse Video on Samsung

That’s all. This is how you can convert a landscape photo to a time-lapse video on Samsung Galaxy. Landscape pictures with a clear foreground are best suited for using this feature. The time-lapse option does appear on certain pictures with a topic in the front, however, the outcomes vary a little bit. The AI sometimes does a fantastic job of lighting the subject to match the shifting hue of the sky. But more often than not, a faint light that forms around the subject when the sky darkens makes the final footage appear strange. Videos taken around dusk, when there is hardly any light, appear more authentic than those taken in broad daylight.