Meanwhile, this method requires Samsung Galaxy smartphones with Android 10 (Mainly S series and Note series), USB Type-C cable, and Samsung DeX app on your Windows PC. In fact, I have tried this method and it works perfectly. In this method you can download your favorite apps and games from the Google Play Store, browsing social media apps like Facebook, Instagram, and WhatsApp and also playing games. The only downside of this method is that you must have Samsung Galaxy with Android 10.

Meanwhile, Windows apps have improved. However, every now and then, you will come across a new app that is very useful and has not yet reached PC. If Android works, however, there is good news. You will possibly run this on your Windows machine with the aid of third-party apps.

You Might Also Like: How to Use Samsung DeX on Galaxy S8, S9 or later on Win/Mac with Charging Cable

Requirements: To Use Android Apps on Windows 10 PC

What is Samsung DeX?

Samsung DeX is a software interface that activated by plugging a compatible mobile device into a spare monitor, laptop, or computer. It runs on all of the flagship smartphones that Samsung has launched since 2017, including the Galaxy S8 or later (mostly S and Note Series). However, Samsung launched DeX for PC in August 2019. It helps users to connect their mobile device to a Windows PC or Mac compatible so they can use DeX right from their laptop.

How to Use Android Apps on Windows 10 PC

So, without further ado, let’s start the process and get things done immediately.

Step 4. When the file is downloaded, go to the folder where it’s downloaded. Right-click on it then select Open to install it.

Step 5. Check the box next to I agree to the DeX for PC software license agreement then click NEXT.

Step 6. Select the folder where you want to install the file and click INSTALL. If prompted click Yes.

Step 7. Wait until the file is completely installed. When done, click OK.

Step 8. Now, launch the Samsung DeX software on your PC.

Step 9. Plug one end of the cable into your phone, while plugging the other end into the PC.

Step 10. After plugging the charging cable into your phone, you’ll see a pop-up message which says ” Start casting with Samsung DeX? All you need to do is simply tap Start now. 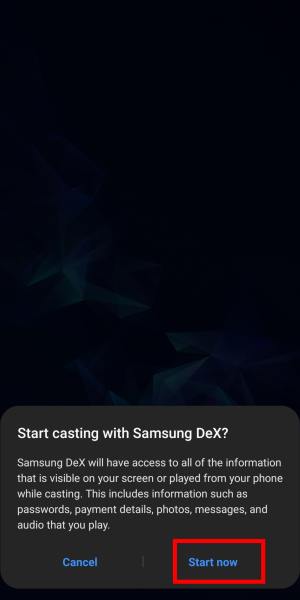 Step 11. Now, you can download your favorite Android apps and games from the Google Play Store and play and use them on Windows 10 laptops.

Use Android Apps on Windows 10