Meanwhile, Google Play, originally born and referred to by Google as the Android Market, is Google’s official Android apps, games, and other content stores and portal for your Android-powered phone, tablet, or Android TV device. Like Apple, the Google Play Store is in the App Store. It is an immense platform and it gives its visitors a great deal of content.

Generally, Apps that you have installed from Play will automatically download updates if the so-called auto-update apps are enabled, updates usually fix bugs and issues to boost their performance on your tablet or smartphone. This is usually a positive thing, but it can also slow down your smartphone, use your mobile data, or stop you from doing other stuff on your device.

So, if you have a slow Android device and you don’t like Play Store update apps automatically while you’re busy with your phone or have thin a data allowance. Whatever the reason is then following the below steps to stop Google Play Store auto-update apps.

Step 1. Launch the Play Store on your Android device.

Step 2. Tap the hamburger menu at the top left-hand corner.

Step 5. Here, you’ll have three options: Over any network, Over Wi-Fi only and Don’t auto-update apps. 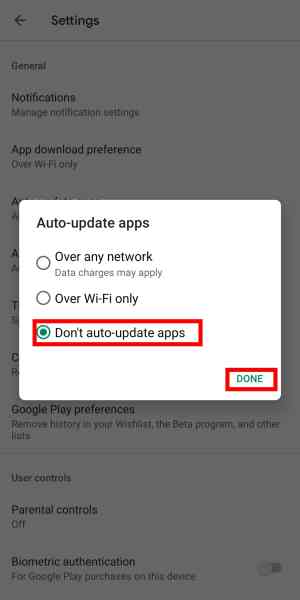 Remember that after this you will always need to update all apps manually in the future. To keep applications up-to-date automatically, simply select Auto-update apps via Wi-Fi only, and not on your data connection.

Also Read: How to set up Parental Controls on the Google Play Store

How to Manually Update Apps in The Google Play Store

Step 1. Launch the Play Store on your Android device.

Step 2. Tap the hamburger menu at the top left-hand corner.

Step 4. Here, you’ll see the list of installed apps on your Android device. In the installed list, the apps are divided into two categories: Updates available and Recently updated. To manually update an app, simply tap the Update button next to each app name. To update all the apps at once, tap Update all. 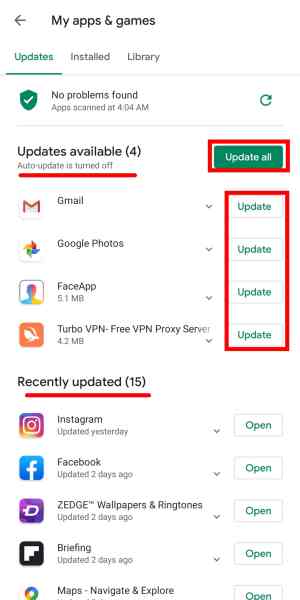