Home Android How to Close Active Apps on Samsung One UI 5.0 or 4.1
AndroidHow To

Do you want to close running background apps on your Galaxy phone? In this guide, we’ll show 2 different methods to close active apps on Samsung Galaxy devices running on One UI 5.0 and One UI 4.1.

It’s simple to lose track of how many applications you’re using at once when using a smartphone. Before you know it, the app you’re attempting to use crashes, your phone is sluggish and laggy, and the battery is at 5%. What took place? What actually occurred was that while you were still browsing your phone, you unintentionally left a lot of applications open.

When you stop using an app but leave it open, your phone keeps working as if you were still using it, burning up memory, power, and data in the process.

The simplest solution to save your phone’s memory and avoid any issues while using other applications is to just close out of apps.

Method 1. How to Close Active Apps on Samsung One UI 5.0

Samsung One UI 5.0 based on Android 13 is still in beta but still there are some features.

The new features are:

The notification bar has seen more changes than just styling. You will notice a new Active Apps menu that displays all the background-running apps if you open the quick access menu and click on the ellipsis (three-dot symbol) icon. The operating software is then stopped by selecting Close. Pretty useful, no?

Here’s how to close active apps in the background on One UI 5.0:

1. Go to the recent apps menu.

2. Tap on the xx active in background.

3. Here, you’ll notice the list of the active apps running in the background. Tap the Stop button next to each app.

You can optimize your smartphone’s performance and check the condition of many different components, including the battery, storage, and much more, using the Device care tool. You can quickly and easily determine how well your smartphone is working and whether you are using it correctly with just one tap. 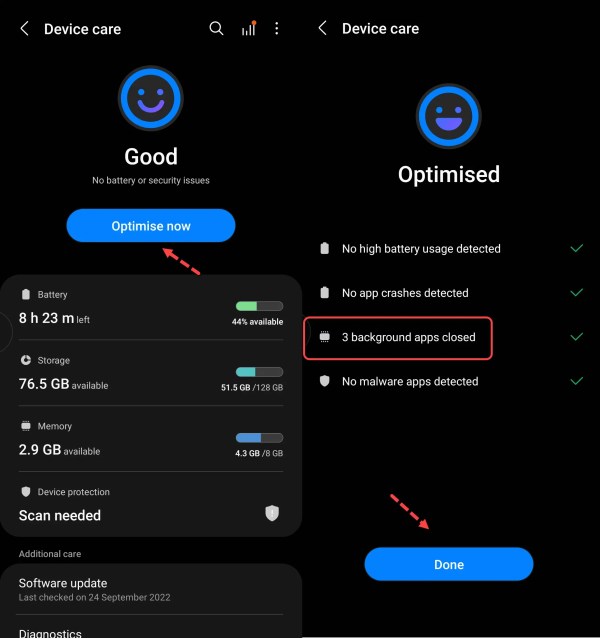 That’s all. These were the 2 methods to close active apps on your Galaxy phone. With Samsung One UI 5.0, you have a dedicated feature called Active apps where you can close the background apps. However, if your Galaxy phone is running on One UI 4.1 then you must the Device care feature.

How to Set a Call background For One Contact on Samsung One UI 5.0

How to Extract Text from Photos on Samsung One UI 5.0 & Android 12L

How to Send a Silent Message on Telegram