How to Get Rid of Snapchat Bitmoji on Android

Since being acquired by Snapchat in 2016, Bitmoji has been incorporated into practically all areas of the Snapchat app. You cannot set your own photo as your profile photo if the ghost icon is present. Snapchat forbids you from leaving the space vacant or with a Bitmoji.

The profile pictures of individuals who didn’t generate a Bitmoji avatar are still available. But once the avatar is made, your image is permanently lost. Snapcode is the same way.

With the help of the Bitmoji software, users can make little cartoon representations of themselves to post on their different social media sites. It is an extremely basic service: You make an avatar of yourself and use it to make a variety of cartoons, GIFs, expressions, and reactions. Then you may use your Bitmoji to express yourself when chatting with someone or writing them an email. I’m done now!

Bitmoji has gained popularity over time among users who became weary of the generic emoji offered on their applications and desired something more engaging and unique. You may periodically swap between the numerous updates and themes that the firm offers, including exclusive ones for sporting events and holidays. Additionally, the app’s simplicity and single purpose make it appealing to both novice users and those seeking minimally-complicated customization. Bitmoji is the only service it offers.

How to Get Rid of Bitmoji on Snapchat on Android?

While some users might choose to use Snapchat without a Bitmoji avatar, others would prefer to do so. In either scenario, the Bitmoji avatar must be delinked in order to remove the current avatar.

Here’s how to remove bitmoji from Snapchat:

2. Go to the Chat section and then select your bitmoji avatar in the top left-hand corner.

3. Tap the Settings icon on the top right-hand corner and select Bitmoji. 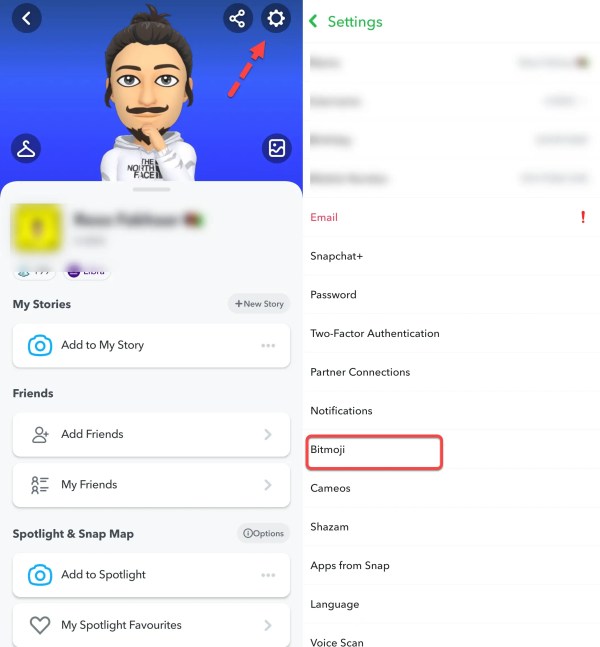 4. On the Bitmoji screen, select Unlink My Bitmoji.

5. Select Remove to confirm it.

Get Rid of Bitmoji on Snapchat on Android

As you can see in the screenshot below that the Snapchat bitmoji avatar is successfully removed.

Get Rid of Bitmoji on Snapchat on Android

When a user deletes their Bitmoji avatar, it no longer appears in the profile area or in the Snapchat profile badge in the upper left corner. Users will instead view their profile avatar as a white silhouette on a transparent backdrop. Additionally, this applies to the user’s friends. Unlinking the avatar through Snapchat will erase the avatar and shut users out of the Bitmoji app if they created their avatar through the Bitmoji app and signed in with their Snapchat account.

This is how you can get rid of the Snapchat bitmoji avatar on Android. The Snap Camera and Lenses remain functional when using Snapchat without an avatar. Users may update their avatar via the Bitmoji app, and Snapchat will immediately utilize the new one when they do so.