Home Android How to Hide Apps on Samsung Android 12 (One UI 4.1)
AndroidHow To

Do you want to hide your apps from the prying eyes on your Samsung Galaxy phone? In this guide, we’ll show the built-in method to hide apps on Samsung Android 12 based on One UI 4.0 and later.

Meanwhile, users like Samsung’s One UI Android skin because of the customizing possibilities it provides. The option to hide irrelevant apps from the home screen and app drawer is one of them. Secure Folder and Android launchers may be used to conceal applications.

When you wish to hide work apps at home, this technique might be handy. When you’re playing with your kids, you don’t want to be distracted by useless alerts. Similarly, you may keep leisure applications hidden during working hours.

If you don’t want to, you don’t have to view every app on your phone. If you want to declutter, simplify things, or restrict other people from seeing parts of the applications you use, Samsung One UI makes it simple to hide apps from your Samsung Galaxy’s home screen, app tray, and search tool.

Whether your device runs the Samsung Experience or Samsung One UI interface, you can hide applications on many Samsung Galaxy devices. As a result, newer models like the Galaxy S22, Galaxy A52, Galaxy M33, and Galaxy Z Fold and Flip, as well as many other Galaxy S, Galaxy A, Galaxy Note, Galaxy M, Galaxy F, Galaxy J, and other Galaxy series phones, will function.

So, here are the steps hide apps on Samsung phone running on One UI 4.0 and later based on Android 12:

Use the One UI Settings 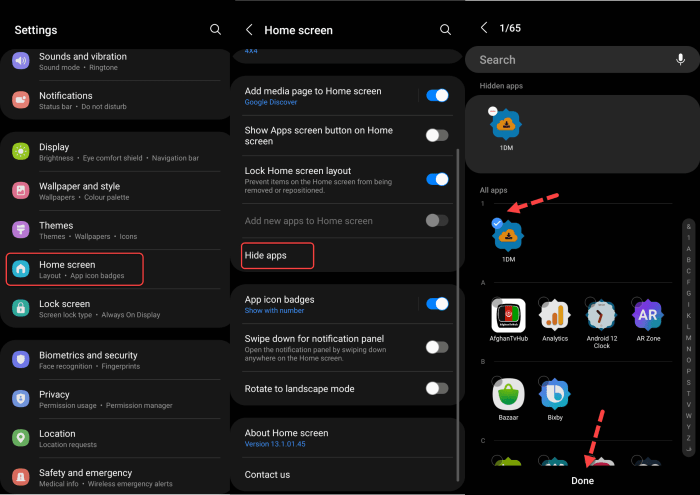 Alternatively, long-press on the Home screen and select Settings > Hide apps > Select the app that you want to hide and tap Done at the bottom of the screen.

Once you’ve followed the above-mentioned steps the hidden app/apps won’t appear on the app drawer. Remember that Other individuals will be able to unhide and launch the applications if you hide them. 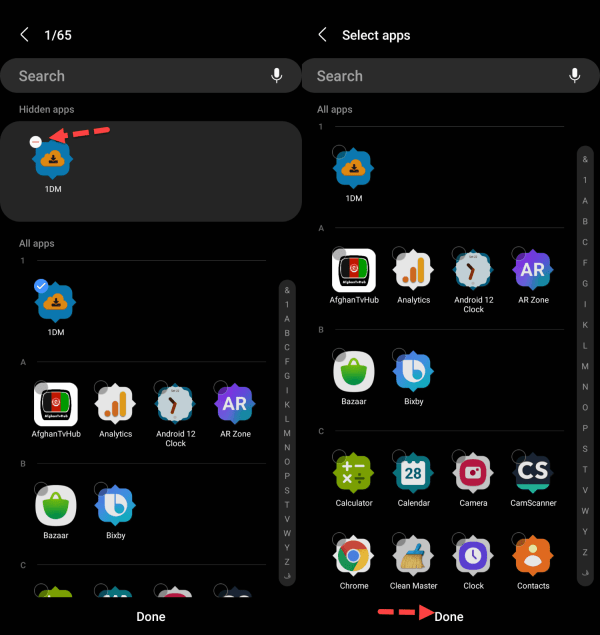 That’s it. These were the steps to hide apps on Android on Samsung phones. Manu people have asked how to hide apps with password then for that you should use the Secure Folder method. Read this to know more about it.

How to Hide Camera Cutout on Samsung One UI 4.0

How to to Enable iPhone Reaction on Google Messages on Samsung

[…] In today’s modern era, Smartphones are very effective and useful for a bunch of things, if we use it properly and we can extract the best things out of it. Smartphones are not just for Socializing, taking selfies, watching HD movies or even playing Heavy Games like PUBG and Asphalt 9. If we use smartphones smartly and in a proper and correct way, we can exploit a bunch of good things out Smartphones such as scanning documents.   Also Read: How to Hide Apps on Android Pie Samsung (Android 9.0) […]