4 Tips to Boost the Speed of Windows 10 Update Download

f you want the latest features and security fixes on your computers, keeping up with Windows 10 updates is absolutely critical. However, it can take hours for the updates, especially when a major new feature is released. So, in this, I will share 4 important tips to boost the speed of Windows 10 update download.

Why do Updates Take so Much Time to Install?

It takes a while to complete Windows 10 updates, as Microsoft continuously adds larger files and functionality to them. The latest Fall Creators update, for example, which made plenty of adjustments to Cortana, Photos, and Edge, can take up to four hours to install. And it takes longer even if you have a hard drive that’s fragmented or almost filled.

In addition to the large files and numerous features included in Windows 10 updates, internet speed can have a significant impact on installation times. It is particularly relevant if the network is overburdened by several users installing the update at the same time.

4 Tips to Boost the Speed of Windows 10 Update Download

When you are facing any of these issues, try the following tips:

The first tip to boost the speed of Windows 10 update download is to select PCs on my local network and PCs on the internet. Here’s how to find this feature and select it.

Step 1. Go the Settings or Press Windows key + I to open Settings.

Step 4. At the bottom of the page, click Delivery Optimisation. 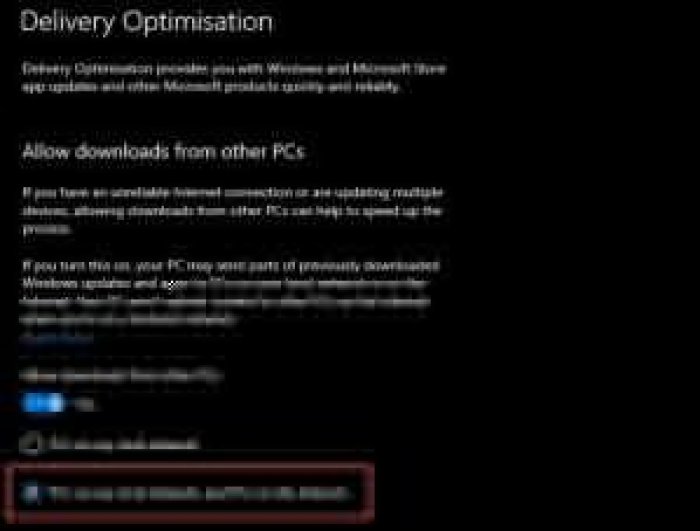 By default, Windows 10 limits the percentage of the internet bandwidth to 45 percent during the update to allow other applications any bandwidth space. But you could increase the number that directly affects the speed.

Step 1. Go to the Start menu and search for Delivery Optimisation advanced settings and open it.

Step 2. Now, select the following option next to the Percentage of measured bandwidth (measured against the update source) and slide to 100%.

It means that Windows 10 will use whatever bandwidth is available if possible.

Some background apps not only occupy memory and CPU power but also the bandwidth of the internet. Try disabling unnecessary background apps to free up some Windows Update space.

Step 3. Select Background apps from the left-hand side.

Step 4. Turn off Let apps run in the background to completely disable all background apps.

Tip #4. Don’t Use the PC while Downloading Updates

Some people suggest that you do not use a PC while Windows Update is running. The device will focus its key operation by not running any apps; downloading and installing updates. Using more modern hardware such as SSD can also be a significant upgrade to increase Windows Update speed considerably, particularly during installation.

3 Ways to Turn Off Background Apps in Windows 10

How to Convert a Screenshot to Text in...

How to Connect Soundcore Liberty Air 2 to...

How to Get Yellow Circle Arround Mouse Pointer...

How to Check SSD Health Percentage in Windows...